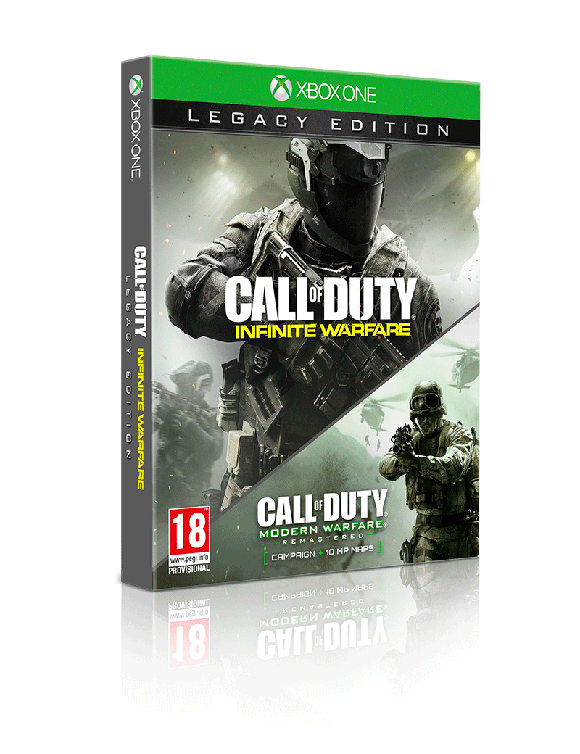 SINGLE PLAYER CAMPAIGN Call of Duty: Infinite Warfare will lead players through an unforgettable journey as they engage in heroic battles with hallmark boots-on-the-ground combat. The campaign spans our solar system, taking players on a journey from Earth to beyond our atmosphere. It's grand scale war with unforgettable characters, rich emotional arcs, an epic new setting and blockbuster Call of Duty action.

MULTIPLAYER Call of Duty: Infinite Warfare features a Multiplayer mode that features an evolution of Call of Duty's movement system with an emphasis on front-line engagement. It rewards players for utilizing their surroundings and applying strategy in the heat of the moment. Maps are designed to immerse players into fast, fun, and frenetic gameplay that players have come to expect from Call of Duty. With its new approach to play, multiplayer will bring innovative gameplay that challenges players to achieve their goals in creative ways based on their specific play style.

ZOMBIES Infinite Warfare will introduce an original cooperative Zombies mode that takes players on a wild ride through a new storyline with unique gameplay features and mechanics. Expect a lot of fun surprises when more details about the new zombies experience are announced later this year.

One of the most critically acclaimed games in history, Call of Duty®4: Modern Warfare®, is back, remastered in true high-definition featuring enhanced textures, physically based rendering, high-dynamic range lighting and much more to bring a new generation experience to fans.

Developed by Infinity Ward, the award-winning Call of Duty 4: Modern Warfare set a new standard upon its release for intense, cinematic action, while receiving universal praise as one of the most influential video games of all-time. Now fans can relive one of the most iconic campaigns of all time, that includes fan favorite missions such as "All Ghillied Up," "Charlie Don't Surf," and "Crew Expendable."

Additionally, players can team up with friends in customizable, classic multiplayer action with the game that introduced the ability to Prestige as you unlock weapons, perks and more. Play on 10 fan favorite maps such as "Crash," "Backlot," and "Crossfire."