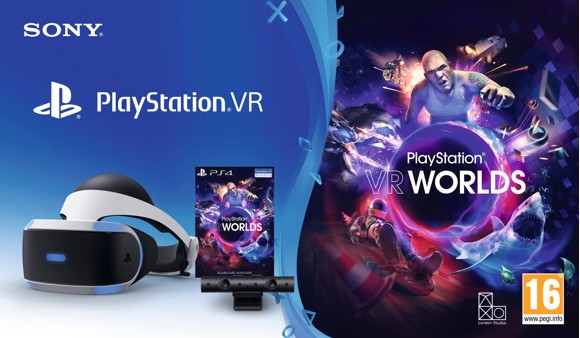 En del av disse kampanjene:
MK5 - Includes Playstation 5 EU Adapter From the moment you enter the world of PlayStation VR, the new Virtual Reality system for PlayStation 4, you'll experience games in an amazing new way. You'll be at the center of the action, experiencing every deta…
Les mer

From the moment you enter the world of PlayStation VR, the new Virtual Reality system for PlayStation 4, you'll experience games in an amazing new way. You'll be at the center of the action, experiencing every detail of extraordinary new worlds - and you'll feel like you're inside the game.

PlayStation has always delivered experiences beyond imagination, spanning from 3D gaming to augmented reality. This heritage leaps forward with PS VR. Now, you can climb beyond the screen and step into the game.

Gamers have played games that have made you lose track of time, but what about games that make you forget where you are? That's what PS VR will do, immersing you in the game with an unparalleled sense of presence.

PS VR will let you play in places and ways you never thought possible thanks to the advanced, custom OLED screen that displays images at 120Hz, 360-degree vision and true 3D audio that makes you pinpoint the sounds around you, so you can lose yourself in games built for PS VR, including VR Worlds and RIGS Mechanized Combat League.

PS VR has been designed to be as light and as comfortable as possible. PS VR is effortless to slip on and off - its minimal weight is supported by an adjustable headband that'll fit anyone.

Others can enjoy a game with or against you with the PlayStation VR Social Screen. You can project what you see in your headset onto a TV screen so others can jump into the action. You can let others join in, as you're in your own world.

You can just plug in and play. PS VR is powered by a PlayStation 4 console, so you can simply connect the two and experience a new world in mere seconds.

VR Worlds is a collection of five different VR experiences that have all been built from the ground up exclusively for the PS VR headset. When we started out to make this game we wanted to create the very best collection of varied experiences, each to showcase VR in different ways and show how incredible VR can be as a media. In PlayStation VR Worlds you will be treated to incredible visuals as your dive beneath the waves, tackle 360 combat as you fight off alien hordes from all around you, or end up in a face-to-face interrogation with a deranged and furious mobster. All brought to you with the immersion that makes VR so unique. So what are these five experiences that make up the game?

The London Heist puts you straight into a gritty gangland thriller where you get to unleash your inner gangster. The London Heist is best controlled by dual PS Move controllers but you can also play with a DualShock 4 instead with intuitive controls that make it surprisingly easy to pick up and play. You will feel highly immersed as you undertake an audacious robbery and then try to make your escape.

Into The Deep (working title) puts you to work as a deep sea salvor. It's an emotional underwater roller coaster. Not only do you get to see fantastic marine life all around you but as you descend through the ocean layers to the inky depths you will experience the true terror of something going horribly wrong.

VR Luge lets you step into the jumpsuit of an illegal street racer. Thunder down a beautiful Californian hillside, only inches off the ground in a position that only VR can put you in. You will truly feel the exhilaration as you dodge cars coming at you with horns blaring or when you slide underneath a massive 18-wheel truck.

Danger Ball is a futuristic sport where you must win or die. Use your head to strike and spin the ball in this intense, fast paced, game. Each rival has unique abilities to use against you as you make your way through the tournament to become champion.

Finally we have Scavenger's Odyssey. In this cab based sci-fi adventure you play an alien treasure hunter. With your agile craft you can leap huge distances, climb walls, hurl debris with your Scavenger beam, and pummel alien critters with your twin pulse cannons. With your unique vehicle you will be able to make your way through a dangerous, infested environment of giant ravaged ships, smashing asteroids to reach an ancient and legendary artifact.