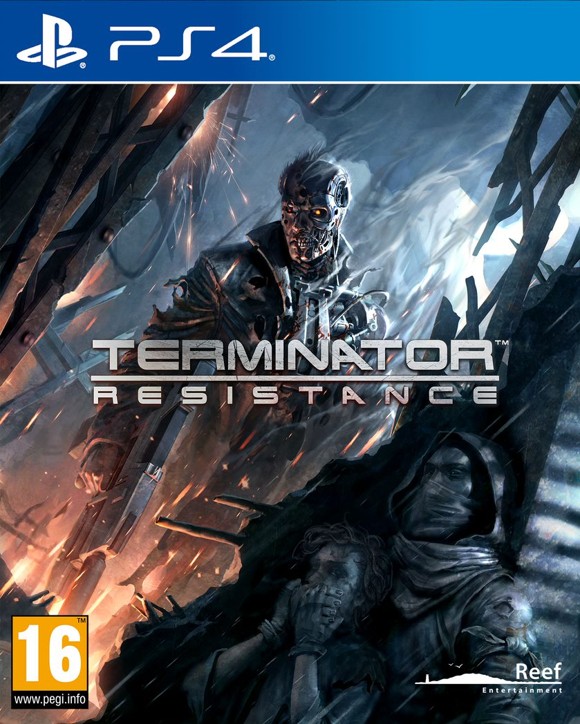 av Reef
En del av disse kampanjene:
Utgave
Region
Plattform
Hasta La Vista, baby. If you grew up with Schwarzenegger, dressed in metal, who did some high-tech butt-kicking, you can get excited.  For the first time ever, the universe from ‘The Terminator’ and ‘T2: Judgement Day’ is recreated for PlayStati…
Les mer

If you grew up with Schwarzenegger, dressed in metal, who did some high-tech butt-kicking, you can get excited.

For the first time ever, the universe from ‘The Terminator’ and ‘T2: Judgement Day’ is recreated for PlayStation, Xbox and PC with an official license. There are rumbling action, an abundance of laser weapons and a breathtaking gameplay that will keep you on the edge of your seat. Are you a fan of the old Terminator movies? Then Terminator: Resistance is for you!

The story in Terminator: Resistance has nostalgic references to the movies, but it also brings completely new material. During the game, you need to make choices that will determine the ending. Meet Jacob Rivers, the new hero.

Terminator: Resistance is a single player, first-person shooter that takes place 31 years after Judgement Day. You put yourself in the shoes of Jacob Rivers, who is a part of the Resistance with John Connor in the lead.

Los Angeles is in ruins, and the postapocalyptic streets are abandoned after a resurrected threat from Skynet. All street corners are patrolled by robots with madness in their eyes, and Rivers quickly realizes that the metal hell and the merciless robots have a certain interest in him, even though he is just an “insignificant” soldier in the resistance.

In the battle for peace on earth, Rivers can defeat the enemy with big plasma canons, grenades and weapons of the future, but there is also a possibility for stealth, where you can confuse the robots with different abilities like hacking.

Terminator: Resistance is developed by Teyon, and we gotta say, some gunpowder was used to make the game beautiful. Check out the trailer above. It is those graphics that bring Los Angeles to life, when you sneak around in the streets and collect loot that can be used for crafting and trading.

Terminator: Resistance is driven by impressive graphics and action-filled gameplay but it is probably the amazing storytelling that should be praised the most. Prepare to be swept away into the storyline with main and side quests, but also the small moments in-between, where you get to hear a personal story from one of your crew members, or experience something yourself in the chaos.

Decide yourself, what kind of hero Jacob Rivers will be:
Make use of the enormous arsenal of weapons to defeat the robots. Attack head-on, use stealth, or hide in the shadows with a sniper rifle. The world is not as forgiving, as it used to be, and you need to find your resources yourself. If you cannot find what you need, you should just make it yourself. Lock and loot!

The fate depends on you:
Protect your friends and other survivors, each of whom has their own story and motivation to live. All choices in the game determine the ending you get. Terminator: Resistance has many endings.

Join the battle against machines:
Fight an iconic enemy from the movies. T-800 and lots of new robots-assassins are waiting for you.