Buy Xbox One consoles at Coolshop 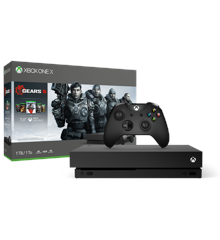 Xbox One, the popular successor of Xbox 360, which was first released in 2013, is one of the most popular game consoles ever. Xbox One is a part of the 8th generation of game consoles like Playstation 4 and Wii U and is competition for these giants.

Xbox One console is developed to make user experience even better for the players. At Coolshop, we are very impressed by its features. Its new technology allows you to play, watch live TV and use apps like Youtube and Twitch.tv. You can even use its Snap an App function which allows you to divide the screen and play while watching live TV or something else through entertainment apps. The technology in the popular Xbox One is updated all the time with feedback from the players.

As an extra bonus, you can use Voice Control to control your apps on Xbox One. It has never been easier to play Xbox.

Check out our selection of the popular Xbox One consoles and find exactly what you need here at Coolshop.